The Art of Timetabled Rides

With ThirdRails Timetabled Rides you will have literally an unlimited number of scenarios at your disposal!


How does this work?

In just five steps:
1. Use Quick Drive, Freeroam or standard scenario
2. Create or load a timetable in your broadcast form
3. Open the ThirdRails GPS/Ebula device
4. Setup your train and drive
5. Forget TS tasks and HUD, use the timetable function on the EBuLa device to cycle through your tasks.
Announcements will be broadcasted to the radar on your tag, but for more fun activate the guard to speak it out.
That's all!
Still not confident how to do this? Keep reading, otherwise have a nice ride!

ThirdRails Timetable Rides are ideal for use in Quick Drive and Freeroam scenario's for the fact that you don't have to make a scenario with the task list yourself. ThirdRails offers an Ebula Device overlay which will guid you through the tasks of the timetable making the standard HUD tasks unnecessary. How do you get a timetable? <

ThirdRails offers four ways to get a timetable.

Whatever way you use, you will probably end up with a timetable looking like this one: 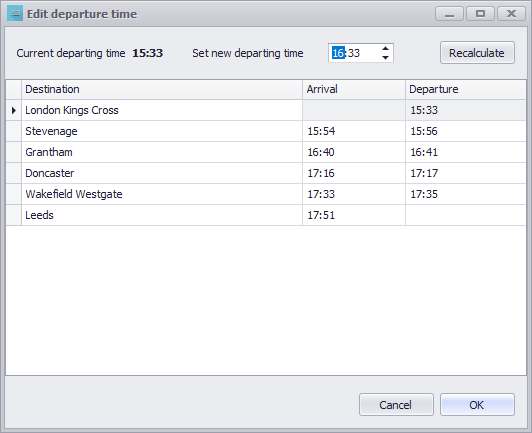 You can now save the timetable to disk by giving it a usefull name. I mostly use the origin-destination-departuretime format f.i. KGX-LDS-1533.ttt. However you are free to use any name you like.

Timetables can only be used when you broadcast your ride to ThirdRails Radar. You can do this by selecting the "radio broadcast" button and fill in the broadcast details, or load them from disk. Select your, just saved timetable, in the Timetable field by clicking the ... button. 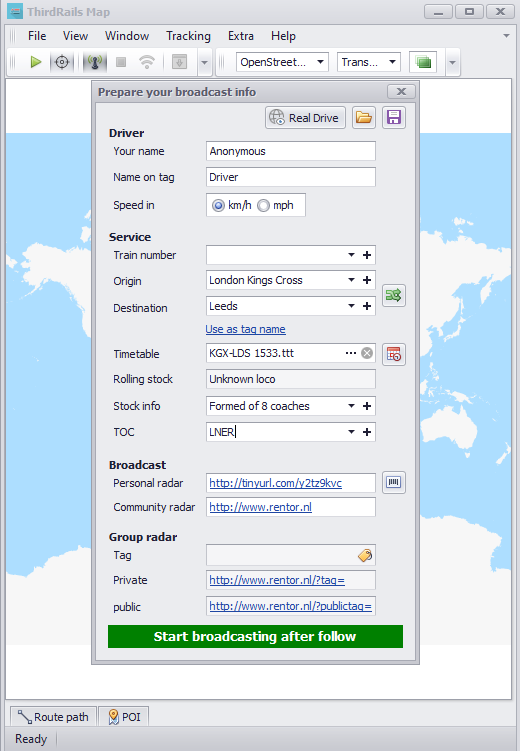 Tip: You can save your broadcast settings to disk into a .service file for later use.

Tip: If you choose Real Drives timetable is loaded automatically (Live Service Timetable)
Start TS and load your Quick Drive of Freeroam scenario with the desired train set, probably a HST is this example. You might consider to Set your QD time just before departure if you like to get the (almost) same time on the HUD when driving. But nothing mandantory here, you could drive a afternoon service midnight if you like.
When the scenario is loaded, start following your train using the Follow button (Green arrow). Note that the GPS-R Radio button is enabled.
When you click it the GSM-R combined Ebula (Electronic Timetable) device is opened.

Note that the clock is default set 2 minutes before departure to give you the opportunity to setup your train. But no stress, you could always reset the clock to any time. (Except for Real Drives)
The device is opened without showing a timetable. Click the 'Open Ebula' button to  open the coupled timetable. On the Ebula part of the device (white part of the form) also click the most right placed button 'Show timetable' to expand your timetable. 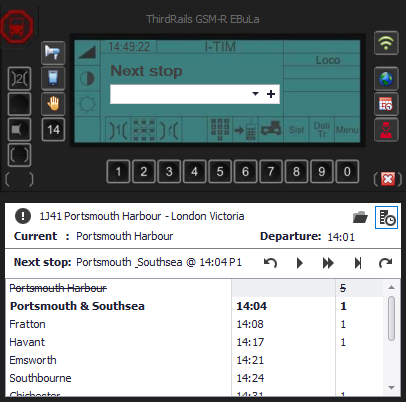 It is important to know that you will drive this timetable using the Ebula clock, not the TS HUD clock.

Now it is time to depart

The normal work order is:
- Depart from London Kings Cross at 15:33
- Click > to announce next stop "Next Stop: Stevenage"
- Drive on......
- Click >>  to announce approaching -> "Approaching: Stevenage" (I do this normaly 1-2 miles before arriving)
- Click >| to announce calling at -> "Calling at Stevenage"  when you arrive
(Note that this button is only enabled when your trains has stopped)

You can click the > and >> buttons as much as you like.
When you click the >| Calling At button the timetable will:
- Calculate you accuracy in RTT style (1 minute early 1E, RT On time, 3L 3 minutes late)
- The timetable will shift to the next destination 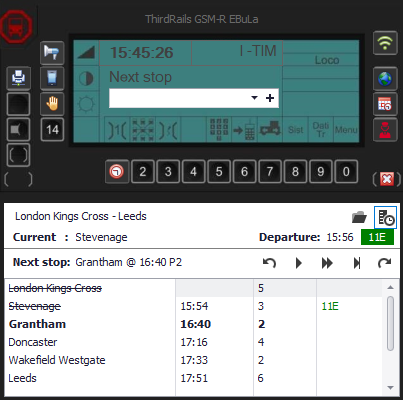 Simply repeat this until you reach your final destination. (Yes I was 11 minutes early...........writing this guide)
Inshort, the cycle is: Next Stop => Approach => Calling At => Next Stop => Approach => Calling At (Etcetera)
If you make a mistake you can correct this, using the Undo and Redo buttons to move to the desired destination without an announcement.

Tip: use the shortcuts instead of clicking the buttons:
> : ALT+,
>> : ALT+. for long announcement, ALT+? for short announcement (only saying next stop)
>| : ALT+T (Will also open your doors)

The announcements are always shown on the radar in your player tag. If you want spoken announcements you can activate the Guard.  Default languages supported are Englisch, German and Dutch. ThirdRails uses the Windows Voice system so you can install other voices if you like.

Tip: You can click almost any label in the Ebula device to make an announcement. If you for example click the departing time you will announce the departure time: "Scheduled departe at 15:56" Play around with it, it is fun!

Click the Clock button to set another time.
You  can set any time you like, by hand or choose one of the links.
You can also set the time to the current time to perform a realtime drive. If you do this you are  driving simultaneously with the real service and all your radar announcements make sense time wise. (Just like ThirdRails Real Drive) 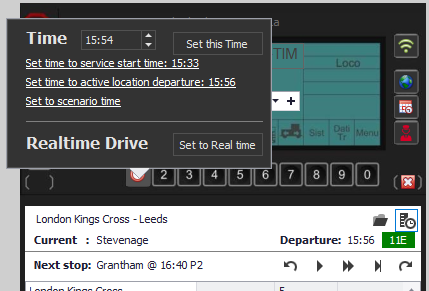 You can click the Folder button on the Ebula device to:
- Load another timetable (From File, Scenario or RTT service)
- Edit the loaded timetable

You change the loaded timetable by:

-Changing departing time
This function is handy when you drive a repeating (hourly) service. You will be able to make just one timetable, which can be used as a template.
Simply change the departing time, and the timetable will be recalculated

Since version 5.0 ThirdRails has a modern timetable HUD, which can also be used to execute timetable actions. All works similar as described above.
For more info see the HUD tutorial.

Just start playing with it, nothing can go wrong here, but you will soon find out that you have an extra unlimited amount of scenario's in your TS library.
Enjoy!